This Film Festival ran from Oct. 23 – Nov. 24, 2020, and the free viewing period for most films is now over. However, there may be bonus features to come, so keep an eye on our Facebook page this December for announcements!

Thank you for joining us virtually for some amazing Pacific and Indigenous films.

One Day in the Life of Noah Piugattuk – Feature Film

Synopsis: In April 1961 John Kennedy is America’s new President, the Cold War heats up in Berlin and nuclear bombers are deployed from bases in arctic Canada. In Kapuivik, north Baffin Island, Noah Piugattuk’s nomadic Inuit band live and hunt by dogteam as his ancestors did when he was born in 1900. When the white man known as Boss arrives at Piugattuk’s hunting camp, what appears as a chance meeting soon opens up the prospect of momentous change. Boss is an agent of the government, assigned to get Piugattuk to move his band to settlement housing and send his children to school, so they can get jobs and make money. But Kapuivik is Piugattuk’s homeland. He takes no part in the Canadian experience; and cannot imagine what his children would do with money.

Directed and Produced by: Zacharias Kunuk

*While this film takes place in a very isolated and distant location in the north, it deals with historical and contemporary themes faced by numerous Indigenous communities across the Pacific.

Two Elders see that their culture is changing and adapting since the impact and destruction of colonisation, but they are determined to ensure its survival somehow. Of the children in their tribe, they see in their grandson the promise and hope of continuing their traditions and passing down of knowledge. He has been chosen by them and is put to the test on this one day.

Set in the landscape of rural Victoria, Australia. The Elders take the boy out bush and leave him there. His classroom is the expansive country of his ancestors. But is he ready for the challenge that is placed before him, and will he know what to do when the time comes? Or will that signal the end of their culture as they know it?

The viewing period for this film has passed.

Set in the mid-1800’s on the remote islands of Haida Gwaii. The Gaaxuustaa people from the north join the TildaGawaay people at their summer camp to put food up for the winter. The families work together, just as they have for generations. Adiits’ii welcomes the TildaGawaay as they arrive in their canoe. The honoured young mother Hlaaya, his best friend Kwa and their favoured son, Gaas, have arrived.

The families clean and dry halibut and harvest mussels and clams from the rocky shoreline. All the while they chatter and reaffirm the deep bonds between their families. When enough food has been put up, they celebrate their last dinnertogether.

The season is drawing to a close, but young Gaas still hopes to paddle offshore to catch his favourite food, black cod. Adiits’ii is eager to take Gaas, but Kwa warns that the weather is turning. Gaas will have to wait until next year.

The next morning Hlaayaa and Kwa wake to find their son has gone. Kwa is furious and sets out to follow Adiits’ii and Gaas in his canoe; but Hlaayaa convinces him that Adiits’ii knows what he is doing. They return to camp to pack as winds begin to blow.

Hours later, as weather worsens, Adiits’ii and Gaas have yet to return. Hlaayaa spots a beached canoe at the end of the bay and runs out to find her son’s lifeless body. Devastated, Hlaaya and Kwa bring Gaas’ body to the house, to the mournful wails of their families.

As morning arrives the Gaaxuustaa are still searching for his best friend Adiits’ii. Never the less, Kwa is determined leave them before strong winds return. With burnt hair and ashen face, Hlaayaa appears exhausted as the family sets off to the south.

When Adiits’ii wakes and finds himself abandoned, an elusive flickering flame appears deep in the forest. Craving warmth and human company, he chases the fire deeper and deeper into the rainforest. Exhausted, he collapses in the hollow of an ancient tree. As he sleeps, supernaturals enter his soul and he transforms into Gaagiixid.

Imbued with newfound supernatural energy and strength, Adiits’ii is driven to frantically forage food through the winter. In spring the families return to discover signs of Adiits’ii’s

supernatural survival. They set out to capture him; and must discover whether they can drive out the supernatural power so that Adiits’ii can rejoin the community.

A ceremony and community celebration for Haida babies and children to welcome them into the community.

MOANANUIĀKEA: One Ocean One People One Canoe – Feature Film

The viewing period for this film has passed

In 1976, a voyaging canoe sparked a cultural revival that quickly spread throughout Polynesia, breathing life into ancient myths and legends. More than four decades later, Hōkūleʻa continues to inspire a new generation of navigators and voyagers to gather their courage and sail beyond the horizon of the Pacific.

MOANANUIĀKEA: ONE OCEAN. ONE PEOPLE. ONE CANOE.

celebrates the historic Mālama Honua Worldwide Voyage that connected countless individuals and communities from around the globe. This voyage also represented the fulfillment of the vision of Nainoa Thompson and his contemporaries, the passing of the mantle of celestial navigation to the next generation of kānaka maoli who will retain the skills of their ancestors and perpetuate this tradition for generations to come.

Find out more about MOANANUIĀKEA here!

Streaming Oct. 30 – Nov. 9     *geoblocked to Canada
The viewing period for this film has passed
Synopsis:

TAKE (te reo Maori: issue, promise, challenge) weaves mana wahine (female knowledge), dance and archival materials to retell the story of the removal of the ancestral Maori meetinghouse, Hinemihi o te Ao Tawhito, from Aotearoa, New Zealand to England in 1892. It is a call to return Hinemihi, embodied by Australian born Maori dancer and performance artist, Victoria Hunt. Set in the liminal spaces between history and emotion TAKE unfolds a story of origins, of traumatic events and colonial violence.

Streaming Oct. 23 – Oct. 30     *geoblocked to Canada
To viewing period for this film has passed
Synopsis:  Vai is a portmanteau feature film made by nine female Pacific filmmakers, filmed in seven different Pacific countries: Fiji, Tonga, Solomon Islands, Kuki Airani (Cook Islands), Samoa, Niue and Āotearoa (New Zealand). It is about the journey of empowerment through culture over the lifetime of one woman, Vai, played by a different indigenous actress in each of the Pacific countries. In each of these Pacific nations ‘vai’ means water.

For more info, check out the VAI Press Kit

Now is The Time – Opening Short

A National Film Board of Canada Production 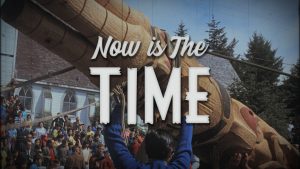 Streaming Oct. 23 – Nov. 3     *geoblocked to Canada
The viewing period for this film has passed
Synopsis:  In 1969, when internationally renowned Haida carver Robert Davidson was only 22 years old, he was instrumental in changing the history of his people forever.

During visits to museums in Vancouver, Davidson had seen photographs of Old Massett Village, with its forest of totem poles facing the sea; but at home there was nothing left. It wasn’t just the totems that had been razed and destroyed: Haida songs, ceremonies, and culture had also been obliterated. “I would go and visit the elders, and they seemed really, like, not connecting to anything,” he says. “I could feel the sadness, and I wanted to create an occasion for them to celebrate one more time.”

With help from his grandparents, his father, and his younger brother Reg, Davidson committed to carving the first new totem pole in almost a century.

On the 50th anniversary of the pole’s raising, Haida filmmaker Christopher Auchter steps easily through history to revisit that day in August 1969, when the entire village gathered to celebrate an event that would signal the rebirth of the Haida spirit. Resplendent with original footage shot by what was then known as the NFB’s Indian Film Crew, Now Is the Time is filled with archival images, animation, and emotional interviews with Robert, Reg, and Haida scholar Barbara Wilson.

The film’s bright, kaleidoscopic scenes show women dancing in their bare feet, men egging each other on, elders wearing paper headdresses, and children drawn in gorgeous watercolour hues. Everywhere is the sound of laughter and tears, as three generations of Eagle and Raven clan come together to raise the pole in the old way, inching it higher and higher, until it stands proud and strong against the clear blue sky.

In his studio, Robert Davidson smiles at the memory. “I was just a young smart-aleck kid thinking I was going to teach the elders something, but it turned around,” he says. “It was the other way around.”

Find out more about Now is The Time here!

Thank you to our Key Contributors to the Together / As One Film Festival:
MediaNet FLUX Gallery, Canadian Heritage, BC Arts Council, and Canada Council for the Arts

We rely on the generosity of people like you for our work across the Pacific. Consider giving today to support our Pacific Resilience COVID Response!

Donate your air miles to us on Aeroplan so we can fly out more guests from the South Pacific and other areas of Canada to attend Red Tide. Your generous donation will help us provide an educational experience for youth who want to learn about climate change and the environment.

Click the donate button, and you can make a difference in a child’s life.

We want to hear from you!

Join Us On Social Media